While we enjoyed our time in Turtle Bay, we decided to take advantage of the good-sized weather window to make the long jump to Bahia Magdalena (Mag Bay, as its commonly called), which would be our longest passage ever, 250 nautical miles.  We calculated a roughly 36-42 hour passage, departing Turtle Bay on Wednesday, November 23rd at 4pm and arriving inside Mag Bay on Friday, November 25 at 12pm (ish).  Since that meant we would be underway during Thanksgiving, I bought some tilapia in Turtle Bay and planned to cook up some yummy fish with baked Kabocha pumpkin with asian-inspired shitake mushroom rice.  I also put together an activity board of things we/the kids could do on the passage to pass the time and make best use of our Thanksgiving sail.

The first 5 hours out of Bahia Tortuga were fun as we had a great patch of wind that pushed us along with the current and provided the longest stretch of sailing we’ve been able to get in on our journey thus far.  Ryan, of course, was thrilled as the winds clicked up to 10, 11, 13, 15 and 18 knots.  Some of our other crew members began to feel a bit queasy and the galley chef (yours truly) began to wonder if conditions would ever be more conducive to cooking below.  Getting periously close to hangry littles, we decided to pull back the power on the sails (double reef the main) to stablize and get things in order for the night (feed the littles, get PJs on, prepare for bed).

The watch schedule we’ve worked out on our longer passages (3 hours on, 3 hours off starting at about 6 or 7pm) was the plan, but unfortunately rough seas between Isla Cedros and the San Benito Islands at shift change meant that Ryan had to stay on through the night.  We shifted our sleep plans then and I slept a bit through the night (fitfully and waking up quite a bit due to rough seas and worry), but woke up early with the kidlets and managed to keep things going until conditions calmed on Thursday midday.  All of us enjoyed some time in the cockpit taking in the views, the calmer seas, and an amazing Thanksgiving dolphin show off our bow! Thursday night’s watch schedule went according to plan and by Friday morning, all of Dakota’s crew were up and chipper, ready to get settled at anchor in Mag Bay.

Coming into Mag Bay, we were awestruck by the size of the bay entrance. At over 3 miles wide, it was the biggest entrance we have encountered and reported to be the widest bay in Mexico.  The Bay itself is reported to be similar in size to the San Francisco Bay and it sure feels like it!  The most obvious difference is the lack of any indications of human life – no coastal towns, buildings, or any other boat traffic.  Coming into Mag Bay, we were the only boat for miles around and there were literally no other indications that any other people were around, amazing!  As we approached “Man of War” cove, where we ended up anchored for 6 days, we spotted bits of civilization (read: roughly 50 structures, i.e., homes, shacks with 250 residents in this pueblo), which was a welcome site after a 40-hour passage!

Anchoring here proved to be relatively easy, as there was no wind on Friday when we arrived.  Similar to our experience in Bahia Tortuga, we were soon approached by a local panga boat to see if we needed anything.  Antonio (who we later learned is the town Sheriff) hooked us up with clean (potable) water to replenish our tanks and topped off our fuel (there is nowhere to stop between Mag Bay and Cabo, ~180 nms).  And since our watch/sleep schedule had gone so well, we actually had the energy to drop the dinghy and go ashore.  Antonio told us that there was one restaurant in town (Miramar, identifiable from the water by the huge whale bones on the beach just outside the patio), so we beached our dinghy and walked into “town.” 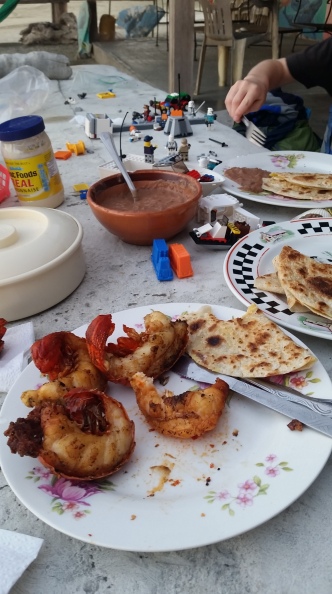 The only food José had left was lobster (langosta), Aw shucks!

Boys and I taking in rest, food and views at the 1 restaurant in town

This anchorage has been such a pleasant surprise – we loved our first day, when we were the only boat anchored here–and the water was clean, warm and calm.  We got out our snorkel gear, the paddle board and our boogie board and played in the water the afternoon we arrived.

But later that night at Miramar restaurant, we were chatting with Jose (the owner) and Antonio (the Sheriff) about upcoming weather and learned that high winds were forecast starting Sunday through Tuesday night.  And those winds certainly arrived!  Starting Saturday night, we started feeling the winds pick up and by Sunday morning, Dakota was rockin’ and rollin’ in the wind.  The winds were so strong overnight that I awoke several times feeling like we were sailing, and had to remind myself in my sleepy stupor, that we were, in fact, still anchored.  Luckily the anchor alarm didn’t sound off until 6am and turned out to be fine, but we have hunkered down today (Sunday) inside Dakota keeping shelter from the crazy winds outside.

One would think the kids would start going crazy, but interestingly we have found that they have found their own rhythm to life afloat.  They seem perfectly happy to play together and often can play for a couple hours with Legos, a pretend game of puppy or creative art projects (i.e., paper airplanes, coloring, puzzles).  It sometime amazes me that they rarely ask to watch TV anymore and Elliott’s Kindle is almost always depleted of battery (no wifi for most of the apps he loves and he reads paper books primarily).  We do, of course, indulge once in awhile with a movie night– last night was the perfect night to do so. With a cozy fall dinner of spiralized broccoli and spaghetti squash topped with homemade pasta sauce and garlic bread, we felt it was the perfect night to cuddle up with blankets and pop in the kids’ current favorite movie, School of Rock, and some vino for mom and dad. 🙂  And even today, when it’s much too windy and cold to play on the water, the kids did a great job of completing almost 4 hours of school this morning and are now happily playing Legos before we go to shore for lunch.

As for mom and dad, I (obviously) have found some time to write and Ryan is keeping busy figuring out old-fashioned ways to get weather, as we have no internet or cell reception here.  He’s been playing with our SSB radio to listen to the “Nets” – morning radio gatherings of boats near and far (very far in some cases) that provide amateur-expert weather forecasting; he’s also downloading weather “faxes” from the SSB to an app on his phone (which does not require cell reception, thank goodness, to work!) so we can get a better handle on when our next weather window is to head south to Cabo San Lucas.  Luckily, our friends on Bloom are still in a wifi-enabled anchorage and they have been kind enough to share weather intel with us. (thank you Bloom!)

We also spent the larger part of the day Saturday deep cleaning Dakota’s interior.  Several long passages and full-time living aboard has meant that Dakota needed some lovin’ — so we all worked together on sweeping, mopping, dusting, organizing, and deep cleaning our heads (bathrooms)–all the while trying to minimize use of our potable water by bringing little buckets of clean sea water inside to wash down appropriate surfaces (i.e., mopping the floors). It is an interesting contrast thinking that the 4 of us cleaning Dakota from top to bottom (including a tedious and time-consuming filing/organization project I completed) took about half the day to complete–whereas in our previous home, even if the 4 of us cleaned all day (6-8 hours), we might barely make a dent in what really needed to be done for our house to feel deep-down clean.  For now we consider it a treat to be done cleaning the whole “house” in less than half a day!

Sailor, traveler, adventure-seeker (with kids in tow) with a passion for the written word, living with intention + purpose and inspiring others to live their dreams. View all posts by dreamdoinspire

One thought on “Bahia Magdalena: 3rd Leg of our Mexican adventures”