After almost a month at the marina in Mazatlan (most of which was planned) we finally threw off the dock lines once again to make our way South.  With a plan (etched in sand as always) in our back pocket, we decided to make the short hop over to Stone Island (Isla de la Piedra) on the south side of Mazatlan, then make the bigger jump over to Isla Isabel on an overnight passage. Stone Island, as it is commonly referred to by yatistas and turistas alike in Mazatlan, is actually not really an island. It’s really a peninsula that juts off the mainland coast but is more easily accessible by boat (panga or private boat).  In fact, it’s a perfect place to anchor but for the fact (or fiction?) of wily thieves that target cruising boats and are known to slash your dinghy off your davit in the middle of the night. In order to avoid that chaos, we opted to day-anchor there and go ashore to visit the sites. Approaching the small bay that comprises this anchorage was an interesting experience, with cargo and cruise ships arriving and departing all around us as we crossed the entrance to the commercial channel. We made it safely though and dropped the hook in 20 feet of sandy bottom and promptly dropped in our (newly acquired) inflatable kayak and SUP for the short paddle to shore. Stone Island, while definitely geared towards tourists (both land and sea-based), is a long gorgeous beach with plenty of palapa restaurants, vendors and musical libations (the good kind, from live musicians rather than the oompa-oompa we typically encounter from amplifiers). What a fabulous day!  We devoured some fresh fish at one of the beachfront restaurants and then mosied over to where we parked our inflatables on the beach and people-watched, played in the sand, and took a little walk down the beach. We loved the laid-back feel of Stone Island and enjoyed mixing it up with “local” tourists (i.e. Mexicans on vacation).

Live music on the shores of Stone Island

Elliott jumping along the uber-long beach at Stone Island 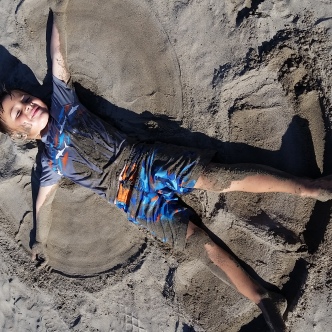 Finley makes sand angels and doesn’t mind the sand in all crevices!

As the sun waned and the winds kicked up onshore, we needed to make our way back to Dakota to prepare for the overnight passage to Isla Isabela.  (Note to self: When paddling/kayaking to shore, always drop the dinghy first so as to have a more *pleasant* way to re-enter to boat should conditions change upon arrival back on board!) Anyways. . . . after a hairy arrival on Dakota, we quickly turned to getting ready to depart so we could leave our anchorage with some daylight left – as we always prefer.

The passage to Isla Isabel is approximately 85 n.ms and we were very excited to check it out as we had heard that Isla Isabel is known as the “Galapagos of Mexico.” We discovered (and can confirm) that from our humble perspective, it appears to be true! Isla Isabel is an uninhabited, pristine island 18 miles off the mainland coast and about 85 miles from Mazatlan. It is a UNESCO World Heritage site and the breeding grounds for thousands of birds, including brown and blue-footed boobies and frigate birds.  Fish and marine life is aplenty and it is quite possibly our favorite destination in all of Mexico to date!

As always, arriving after an overnight passage kinda wipes me out (I’m wimpy and need at least 5 hours of continuous sleep rather than the 2-3 hour chunks we get on a passage), so our first day there was a bit quiet as we took our time anchoring (the rocky/boulder/coral-y bottom has been reported to tear up anchors and chains and many boats drag anchor here). But we did have a visit from a lovely fellow cruiser who gave us lots of great insider tips on visiting the island, the kinds of wildlife we would see and how to best approach the beach for a dinghy landing.  As an Alaskan wildlife guide back home and a repeat visitor to Isla Isabela, Christian was an amazing resource–kind and wonderful–as were all the cruisers we met and hung out with at this anchorage.

Day 2, rested and revived, we decided to go ashore to hike to the Lago Crater (an interior lake) and check out the birds and iguanas. As luck would have it, all of our cruising neighbors were of the same mind, so we ended up hiking with the crew (Nicole and Vlad) from All Day and then met Iwa (Jeff and Dan) and Vital Spark (Matt and Ana) on our hike around the island. What an awesome bunch of people! Even though they were all kid-free, they were so awesome with the boys and in fact on our hike back to the beach, Elliott ditched us and hiked ahead with Iwa and Vital Spark for much of the time. Our hike to Lago Crater was a wonderful break to stretch our legs (indeed, to actually exercise on land was a treat after the passage) and we encountered so many frigates and brown-footed boobies! We also found *huge* insect hives (we weren’t sure if they were termites or ants), lots of little lizards and all kinds of gorgeous flora.

The opportunity to observe the frigates in the midst of their mating season was quite an educational treat and we were reminded *why* we are doing this.  Indeed, on our second day ashore, when we hiked the other side of the island through elevated mangroves to an abandoned research station, we felt like we were transported back to prehistoric times.  And with the exception of the hollowed-out research station (which was kiinndda creepy to me), we were the only humans around and there were quite literally no signs of human existence.  In fact, our only indications that humans had ever passed through this area before us was the tramped-down grass trail we were on, the tame and unafraid nature of the iguanas and the complete lack of acknowledgment by the frigates. At the end of the trail we found a completely pristine beach and as one would expect, we were the only people on it.  The volcanic tide pools held little treasures for the boys to explore and both Elliott and Finley were thrilled to see black sand crabs and teensy-weensy little white hermit crabs come to life when the waves went out.  We explored a cave on that beach that appeared to be full of old lava tubes and nestled our toes in the softest sand we’ve felt in Mexico. (Seriously, it felt like powdery, fluffy sugar!)

In addition to the amazing nature we experienced at Isla Isabela, we were lucky to encounter an amazing group of cruisers as well. The day hike with them and subsequent dinghy visits (to their vessel and ours) were so warm and wonderful, we felt lucky to visit the island when we did. Indeed, I think Isla Isabel attracts a certain kind of cruiser–the kind who wants to explore and experience anchorages off the beaten path and who share a collective regard for these sacred places. For example, in our last hours at Isla Isabela, we were visited by our neighboring boat, Maistral, who we had seen rowing here and there on a daily basis. We figured he was fishing but were so surprised when he came by, just as we were preparing to depart, to offer us one of the 2 parrotfish he has *just* caught (by Hawaiian sling no less! Truly a purist!) We were so awestruck by his generosity for a few reasons: first, he is clearly cruising in a pure, bare-bones way–a small, no-frills boat (probably without refrigeration or any other creature comforts) and he is spearfishing to catch his food on a daily basis. Second, he was kind enough to fillet the fish for us on the back of our boat so that the boys could learn from him.

I’m not sure I can really put into words how touched we were by this gesture. The act of giving another person a freshly-caught fish is one part of it. But teaching an impressionable young boy how to fillet a fish and teaching him all about the inner workings of the organs we saw when he dissected/filleted the fish, is no insignificant thing to us now, despite the fact that in our previous life we might not have felt the magnitude of this act. But out here, when we are all on the hook and (in theory) living a somewhat meager existence, it felt much more poignant. Josh and Isabel (Maistral) took time to hop on board Dakota, chatted with us about their time in Isla Isabel and his plans for cruising, all the while dissecting and filleting the fish for our benefit. He took the time to tell us about each organ and piece he was taking out and what it did. He explained the differences between this type of fish (reef fish) and other fish Elliott might catch on a rod. He was in no hurry and he had no other agenda. He was humble and kind. He was simply a man with extra fish and time to teach a young boy (and refresh his parents) the basics of preparing fish for human consumption.

This last interaction at Isla Isabel truly left a lasting impression upon us as we departed. So, thank you Josh and Isabel! Our little token of appreciation (bottle of wine) is dwarfed by what you’ve given us. I’m reminded of that (somewhat cheesy and cliche) saying about “give a man a fish, feed him for a day, teach a man to fish, feed him for a lifetime.” Cliche as it may be, we are in awe of you and thank you!

Now, since I took a gazillion photos on this leg of our journey, here is a little snapshot of the highlights from our 3 day adventure anchoring at Isla Isabela.

The boys checkin’ out the iguanas 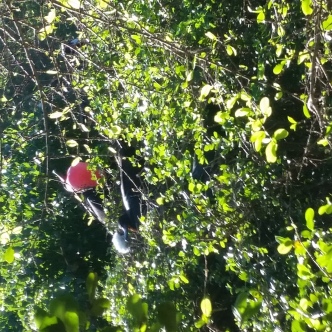 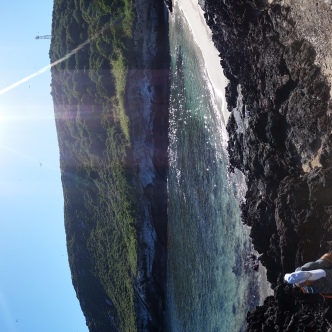 Hiking around the island we found a lava cave, amazing tide pools and the most gorgeous untouched beach! 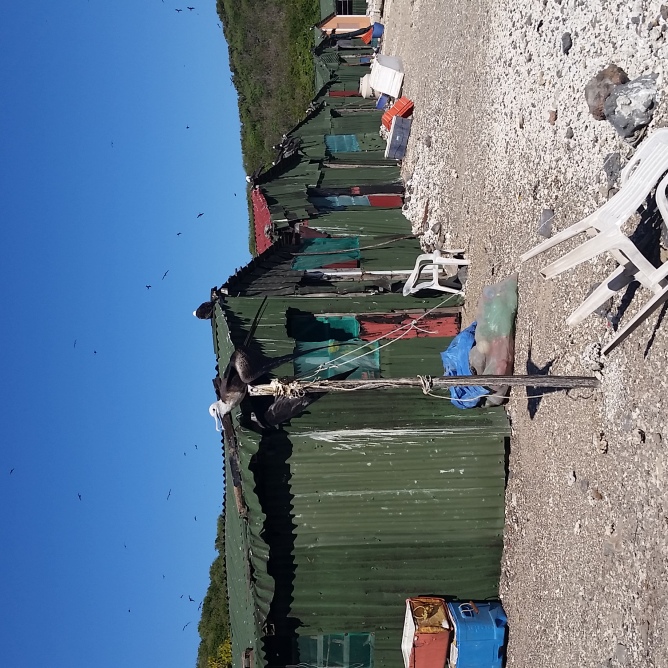 Fisherman camps on the shores of Isla Isabel

Views from the fisherman camp

Elliott and Finley play with hermit crabs and are entertained for a long time; Fisherman camps on the shores of Isla Isabel (the men come from nearby San Blas for 6-8 day blocks to work); the amazing view from the primitive fisherman camp onshore

Sailor, traveler, adventure-seeker (with kids in tow) with a passion for the written word, living with intention + purpose and inspiring others to live their dreams. View all posts by dreamdoinspire